On the Halloween Night, Sheeshaboo, the ghost, takes flight to visit his friends, the nomchoms.

The Nomchoms sit on top of a branch next to a friendly owl, where they overlook a scene under a crescent moon. Witches fly on their broom sticks, fireflies glow bright, and other creatures make their presence known. Please take a seat and enjoy this Hallow’s Eve.

Nomchom’s are little monsters that live in the
refrigerator. Included within this library is a bundle
of animated shorts.

Based on a short story by Hans Christian Andersen, The Money Pig
is a subtle and playful tale of class relations involving a
group of toys in a child’s playroom. It was completed in 2002
and screened at several SF Bay Area film festivals, including
New Voices and Visions Film Festival in Oakland CA and the Film
Arts Festival of Independent Cinema in San Francisco. It was
also the winner of several film animation awards, including the
Berkeley Video & Film Festival and the Black Box Theater Film
Festival in Oakland, CA. 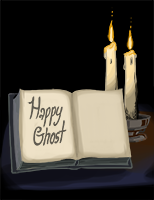